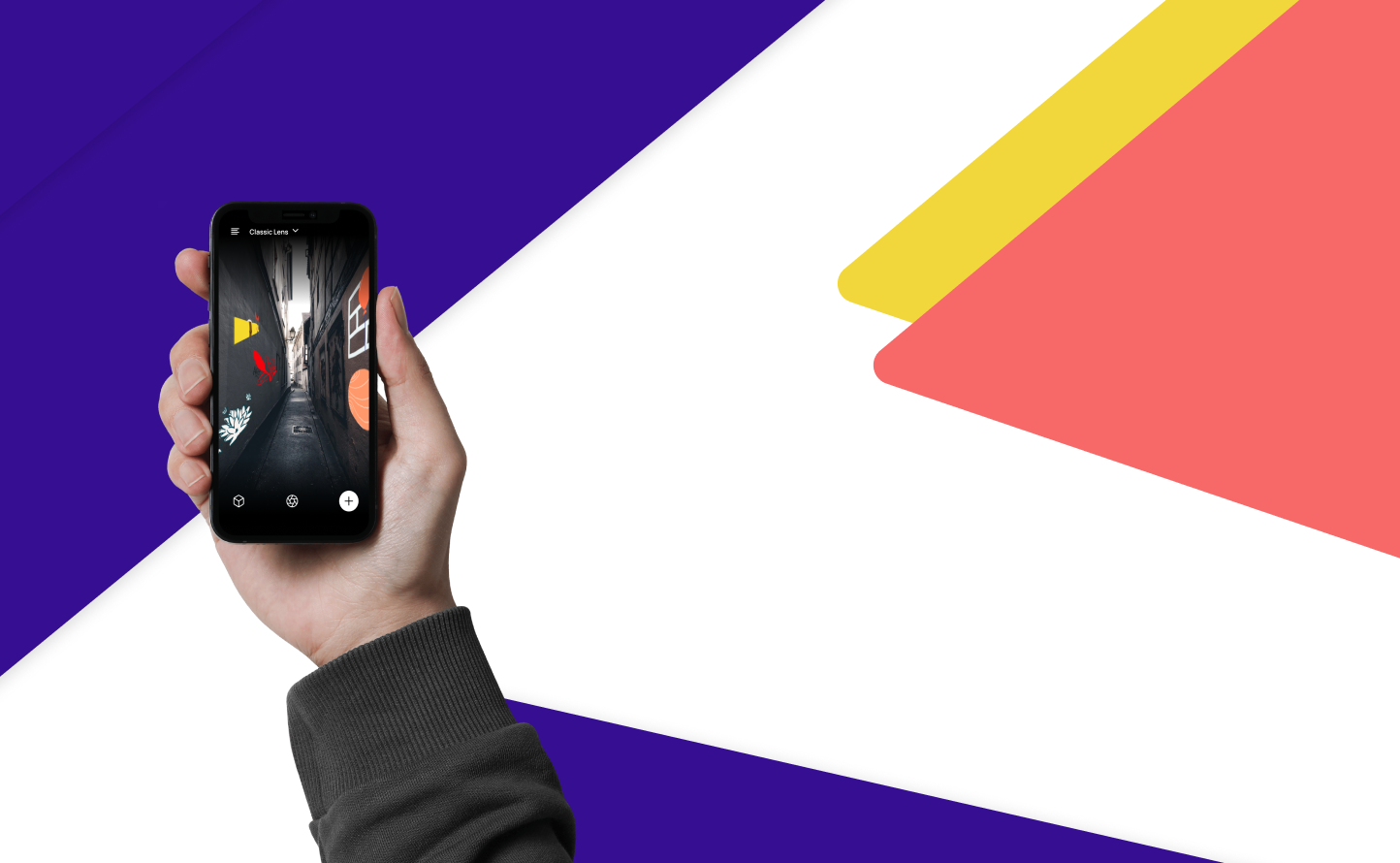 Mureality is a mobile app for creating and sharing digital murals or “tags” that users can see at real locations in augmented reality. Users create art pieces that appear on a map or in an AR view using their phone camera, so they can view murals live at the location or while exploring the map from home.

The Mureality app also functions as a hub for creatives to connect, collaborate, discover and inspire. Like other social media platforms, users can check out the works of other users, engage with their art, and follow their creative journey. Discovering other creatives through virtual murals they’ve left, users can inspire and engage with others.

The concept for Mureality was created by a team of five designers for the 2021 University of Washington Bothell Design Jam, designed and prototyped entirely over one weekend when the design jam took place. Each designer had a hand in each step of the design process as a “wildcard”, but my most prominent personal contributions were leading the user research (survey design and user interview moderation), project management, and prototype design.

View the final project submission here on Devpost, or watch our award-winning Design Jam presentation below: 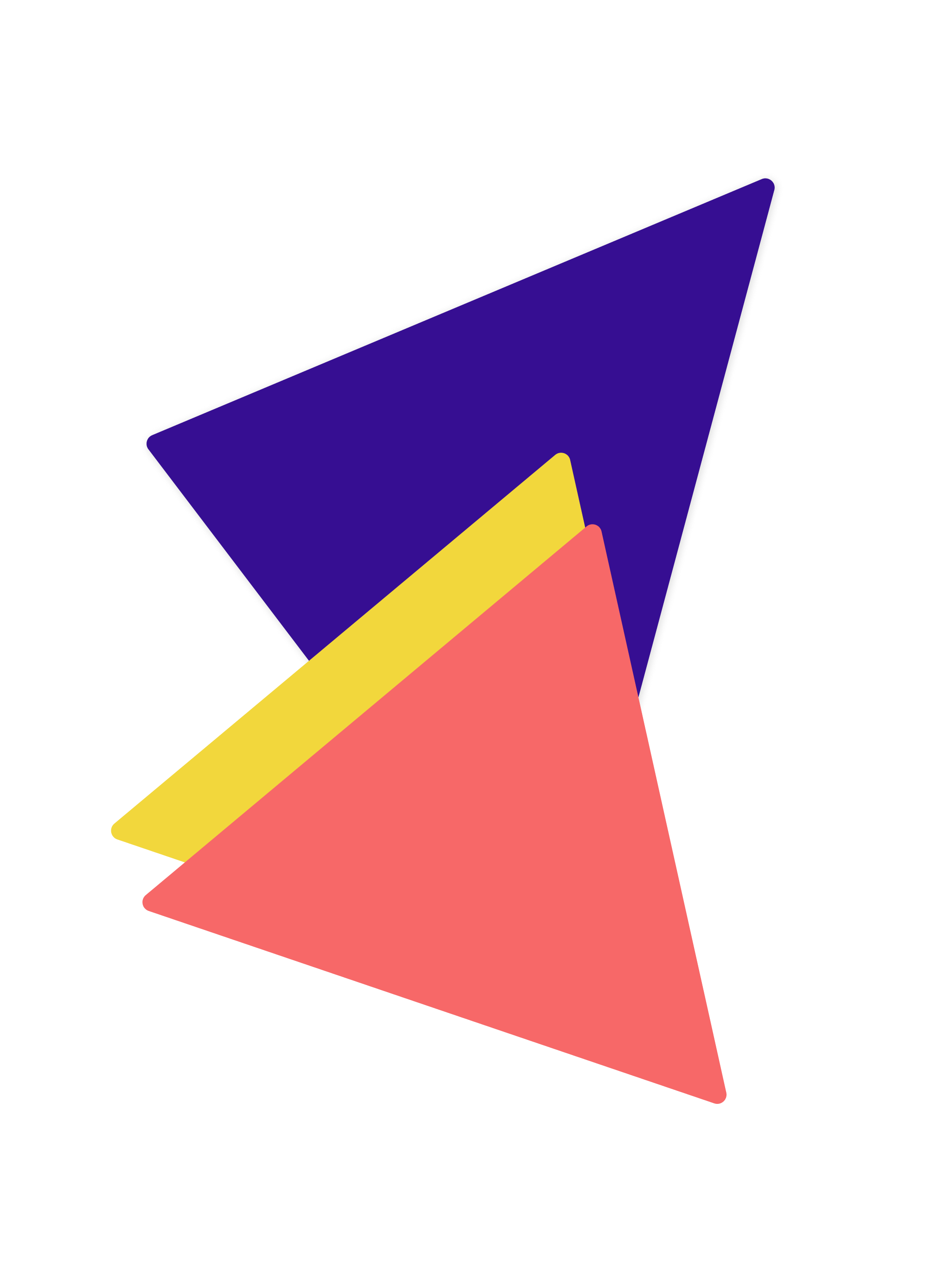 There's a certain kind of whimsical magic that comes from seeing art in public spaces. From small etches of spontaneous graffiti to large works that took time and planning, the marks a person has left behind reflects what they were thinking or feeling in the viewer's space, and chose to share with the world.

But while street art might be a very public art medium, it may not be the most accessible art form. Roadblocks may include local graffiti laws, supplies needed, transportation limitations, and - in a time such as the COVID-19 pandemic - safety concerns.

What if artists could create and build on others’ works of art, without needing a single can of paint? Or explore murals in cities across the world, without leaving the safety and comfort of home? By enabling collaboration inspired by projects like Reddit's r/place (an April Fool's social experiment with a large collaborative canvas), in a global and digital space much like Google Earth's street view, the concept for Mureality was born.

How might we...
‍
• Reinvent the way creatives can collaborate and showcase work...
• While creating an interactive experience with public places...
• In a way that is safe and accessible? 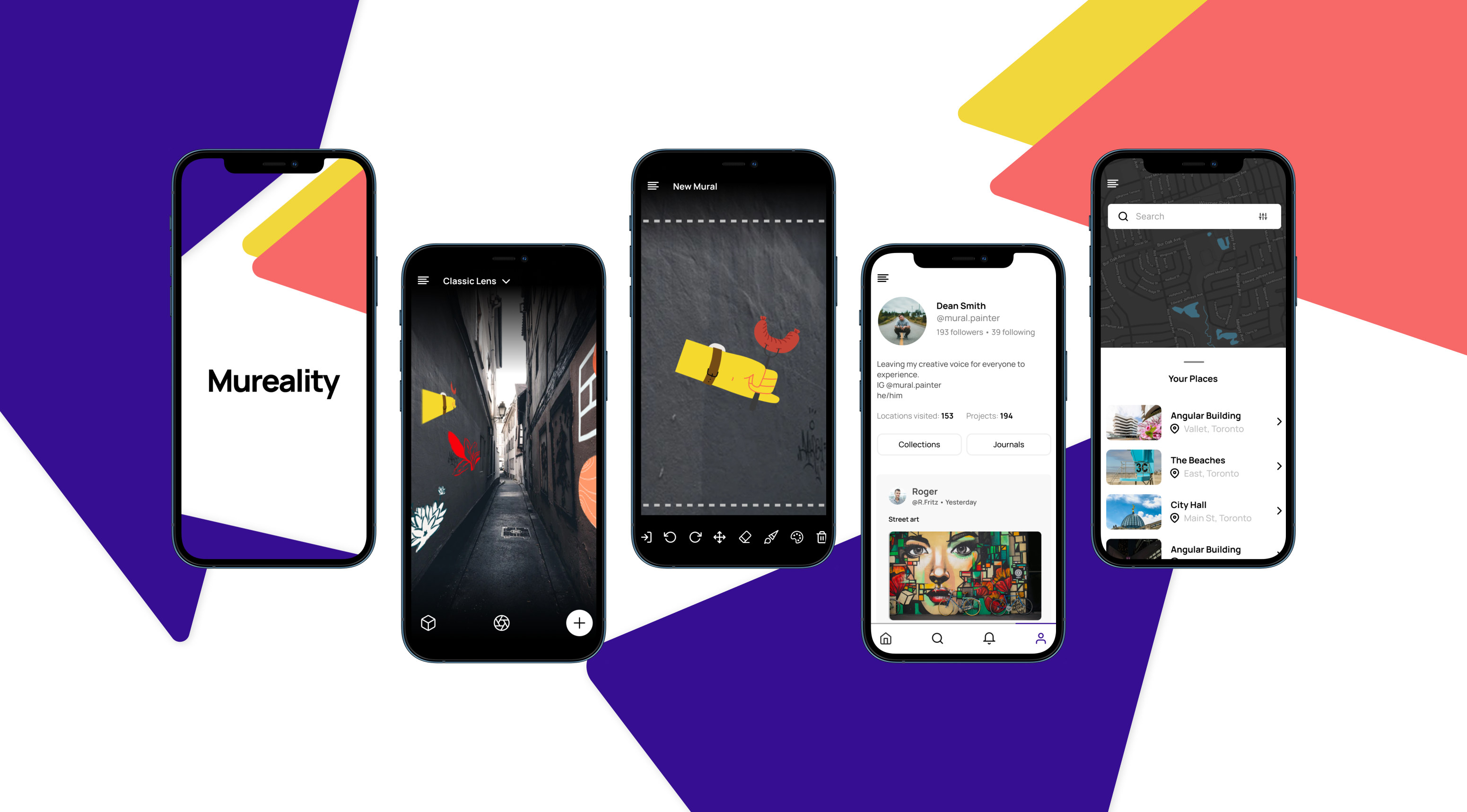 To empathize with our potential users, we surveyed and interviewed artists of various mediums about their creative habits. Since Mureality would expand mural-making to more than the “IRL” street artists of today, we sought insight from anyone who might take up an interest in the digital form of this art medium, such as digital artists, illustrators, writers - really anyone who enjoys creative outlets.

After distributing surveys and gathering interview participants, I led the user interviews using our question guide. I asked about all parts of their creative process, including what mediums they used, where they drew inspiration from, and what their creative aspirations are.

We wanted to know what platforms artists use to share work and how often they collaborate with others. We also asked about any correlations their art may have to public spaces - for example, what a writer might like about brainstorming at a coffee shop, or if someone has ever contributed to the scribbles of a heavily-graffiti’ed bench.

• Where do you draw inspiration from?
• How do you usually share things you’ve created/drawn/written?
• Have you ever visited a public place to create something?
• How frequently do you go outside - can you explain to me your “typical journey”?
• As a creative, which platforms do you frequently use for inspiration? 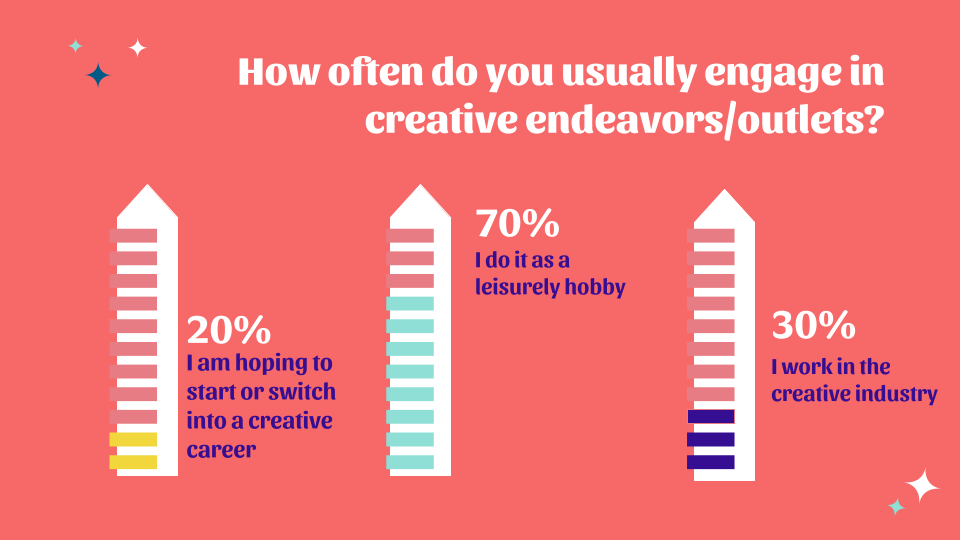 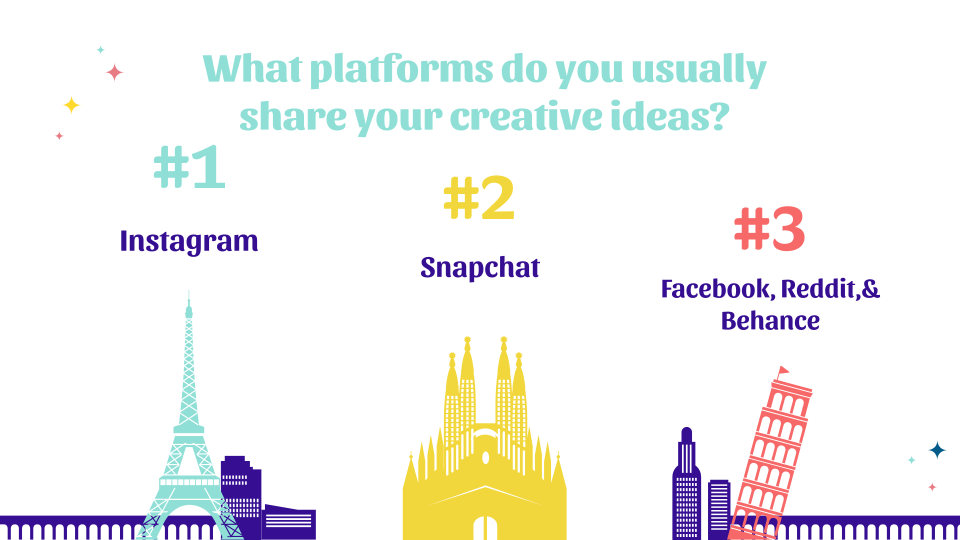 The majority (about 70%) of our survey respondents found art as a leisurely hobby, and about 30% of respondents said they work in a creative field. The top platform for sharing art and creative ideas was Instagram, followed by Snapchat, Facebook, Reddit, and Behance.

Our interviewees gave us more depth into their creative processes. From our conversations and observations, we gathered a lot of information on different types of sources for inspiration, and drew loose categories for those sources such as pop culture, social media, the creator’s environment, business, and more. 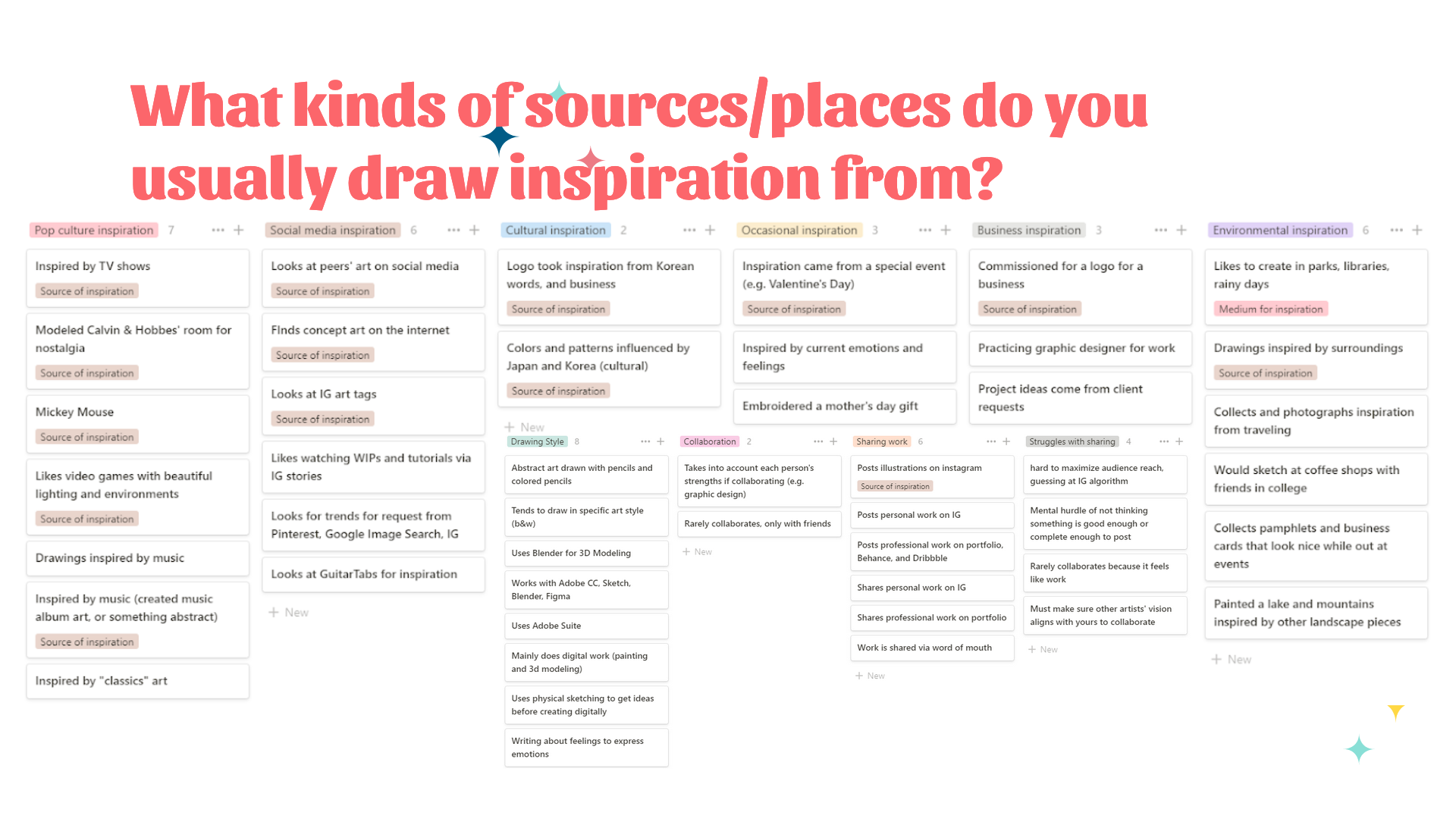 The most similar experiences we could find to Mureality were well-known augmented reality or virtual reality (AR/VR) apps, such as Pokemon Go, Snapchat filters, and Tilt Brush. These products, often the first AR or VR experience a user has had, set a precedent for how users would expect to interact with a product like ours.

Apps like Pokemon Go and Snapchat use a phone’s camera to insert AR viewable content into surroundings, but the content and its placement in the camera view is limited. Games such as Tilt Brush, a VR application from Google, allow the user to be much more creative by using different colors and brushes to make VR art, but only in the VR environment fully controlled by the headset, with no mobile interface or connection to the world around the user.

We wanted Mureality to have a combination of these features, where a creation interface like the Tilt Brush palette could be translated into a mobile view, and could build art pieces in the user’s real environment viewable through just their phone camera.

We wrote a few user personas of different types of creatives that might be interested in Mureality, and what we might offer them. These personas used different art mediums, and each have their own creative goals, needs, and pain points.

Not only did this help us conceptualize what artistic features we could provide for users (for example, a writer may be more likely to use the app if there was a text editor for mural-making), but it also helped us understand how our users might share their art.

Many creatives use different forms of social media to share and inspire, but what roadblocks were they reaching with their current methods? How could Mureality address these struggles and help them engage with other creatives in the way they want? 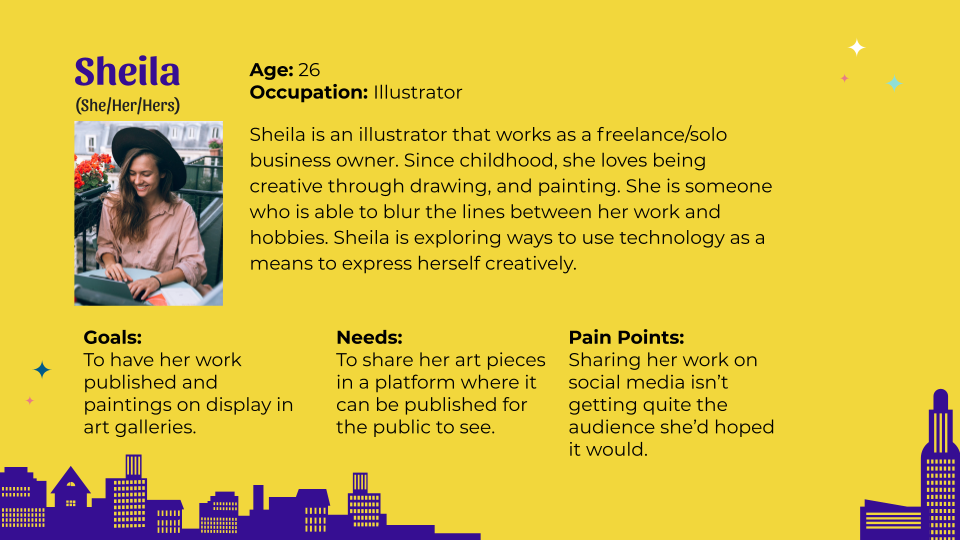 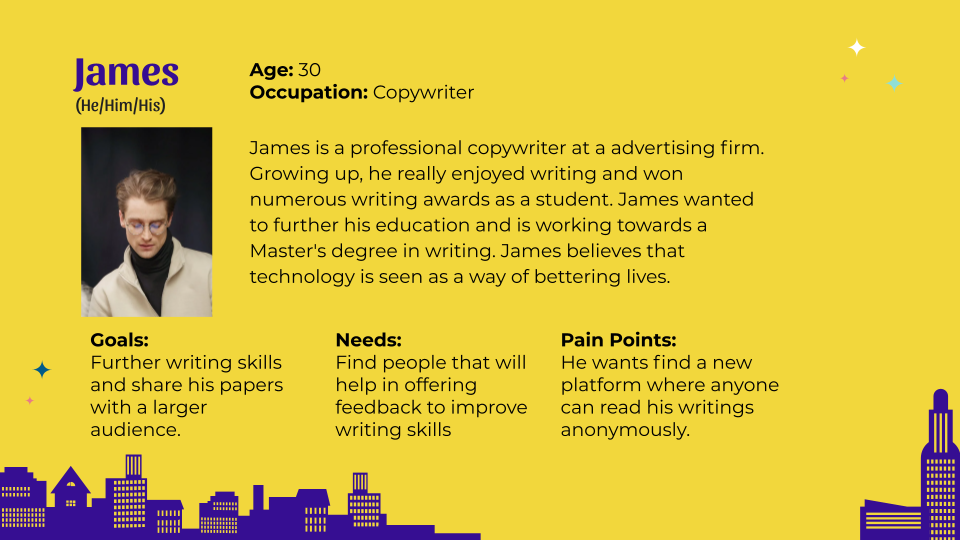 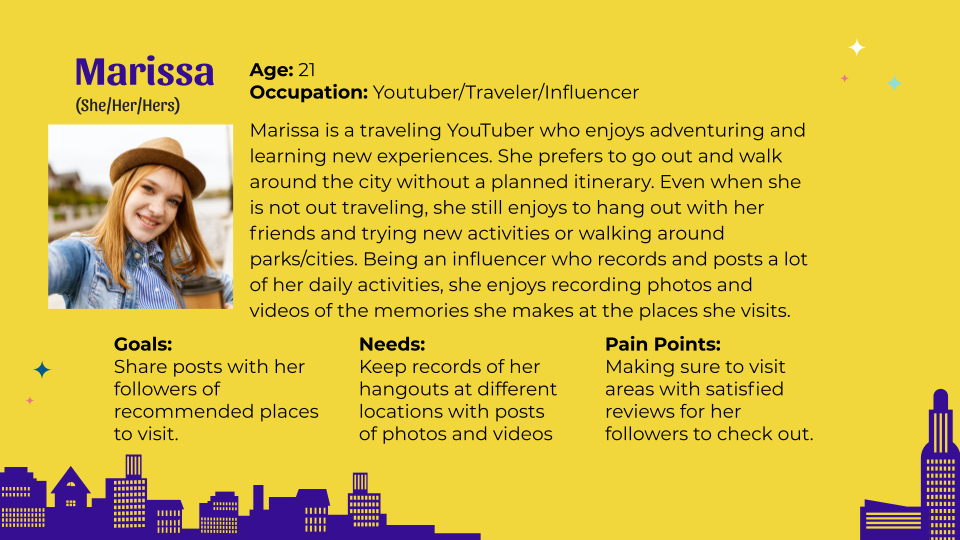 From app discovery to regular use of the app, we outlined the journey our users would take with Mureality. Determining their goals, thoughts, and feelings with each action they took allowed us to predict potential issues. Based on these, we thought of opportunities that would address these feelings and needs. 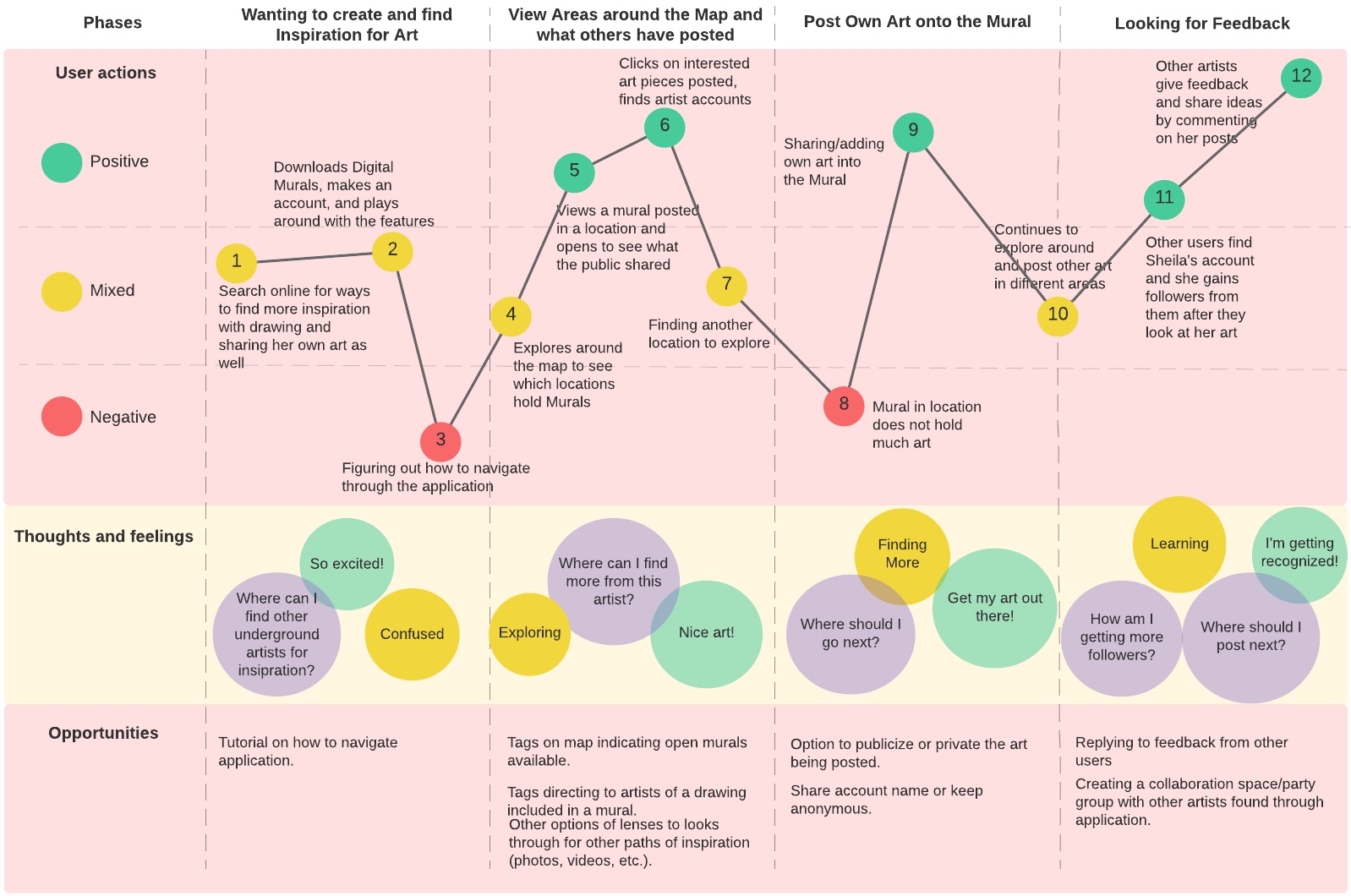 Our team generated ideas of potential features for Mureality, based on research, user interviews, and our own creative visions of what Mureality might be. It became clear that not all ideas were going to fit within the scope of the Design Jam timeline. I structured this prioritization matrix for us to organize all of our feature ideas into, and we sorted by level of effort against the demand it would have among users.

Among the most important features we prioritized based on this matrix were: drawing (visual) and journal (text) murals, the ability to like/comment/share posts, and exploring art in AR when physically visiting a location. Other features were kept in mind and as notes for potential future iterations. 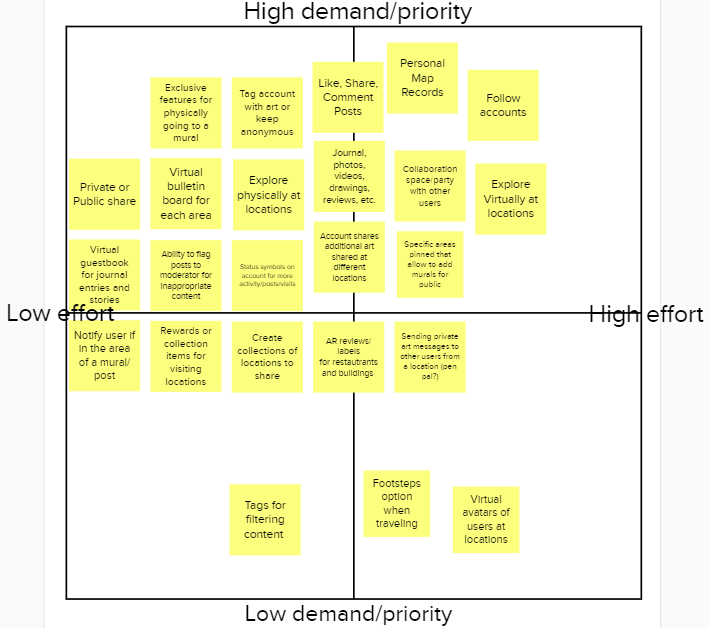 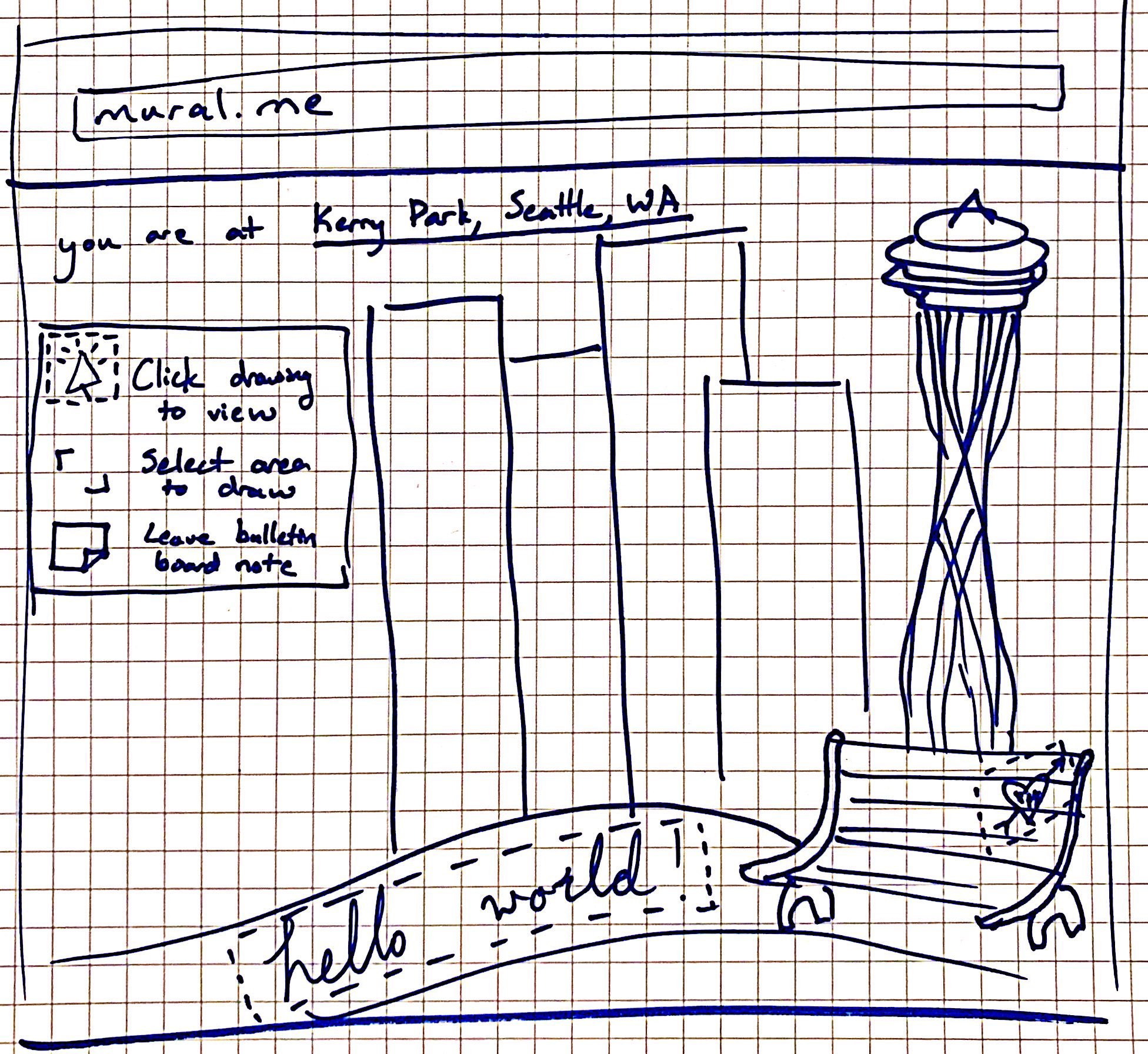 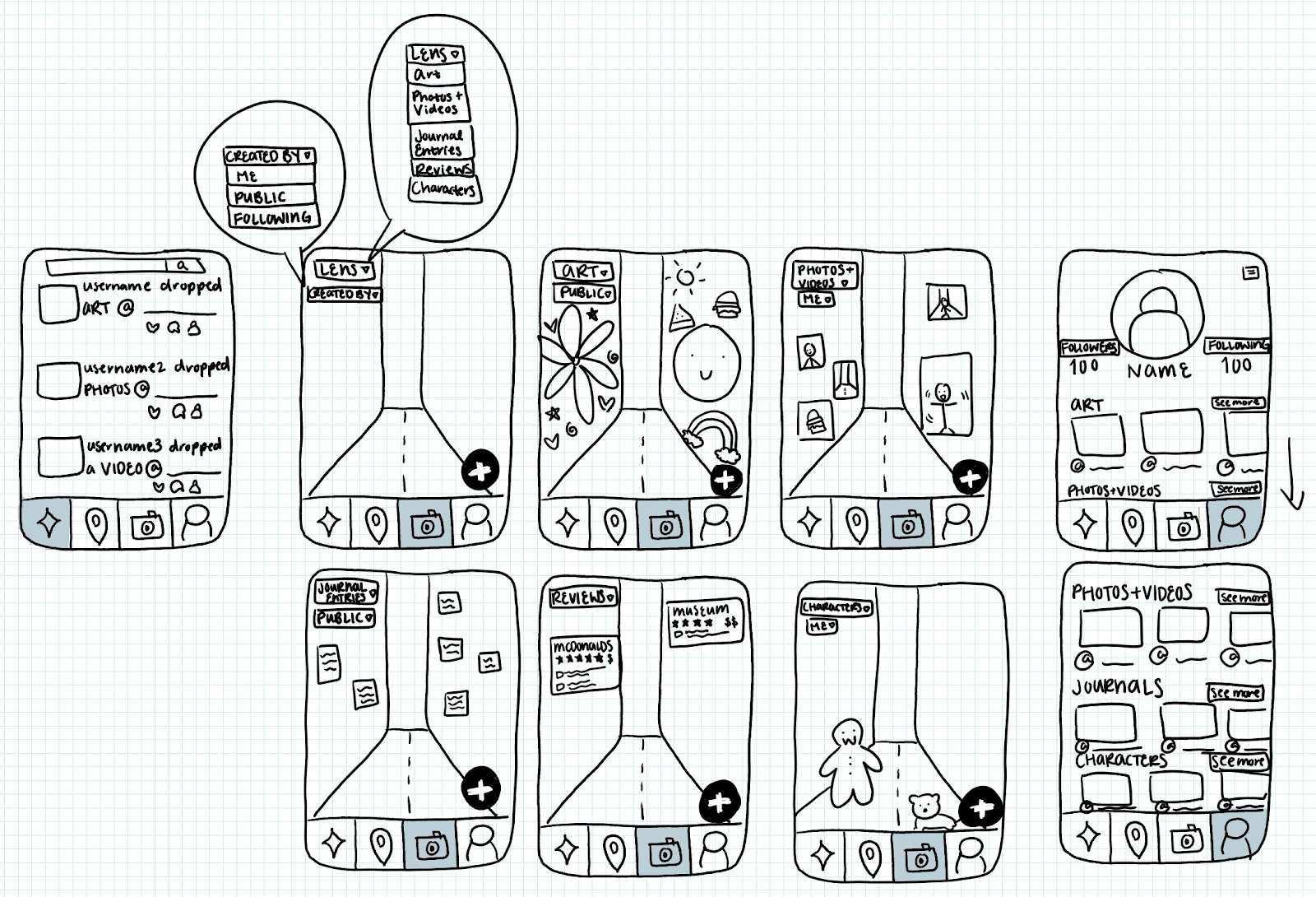 Once we decided which features we wanted, we conceptualized both desktop and mobile views in sketches, as we had ideas for how to experience the AR murals both from home and on the go. However, we realized with the time constraints of the event, we would need to prioritize one view, and since viewing murals in AR while on the go was a major part of our experience, we went with a mobile-first approach. 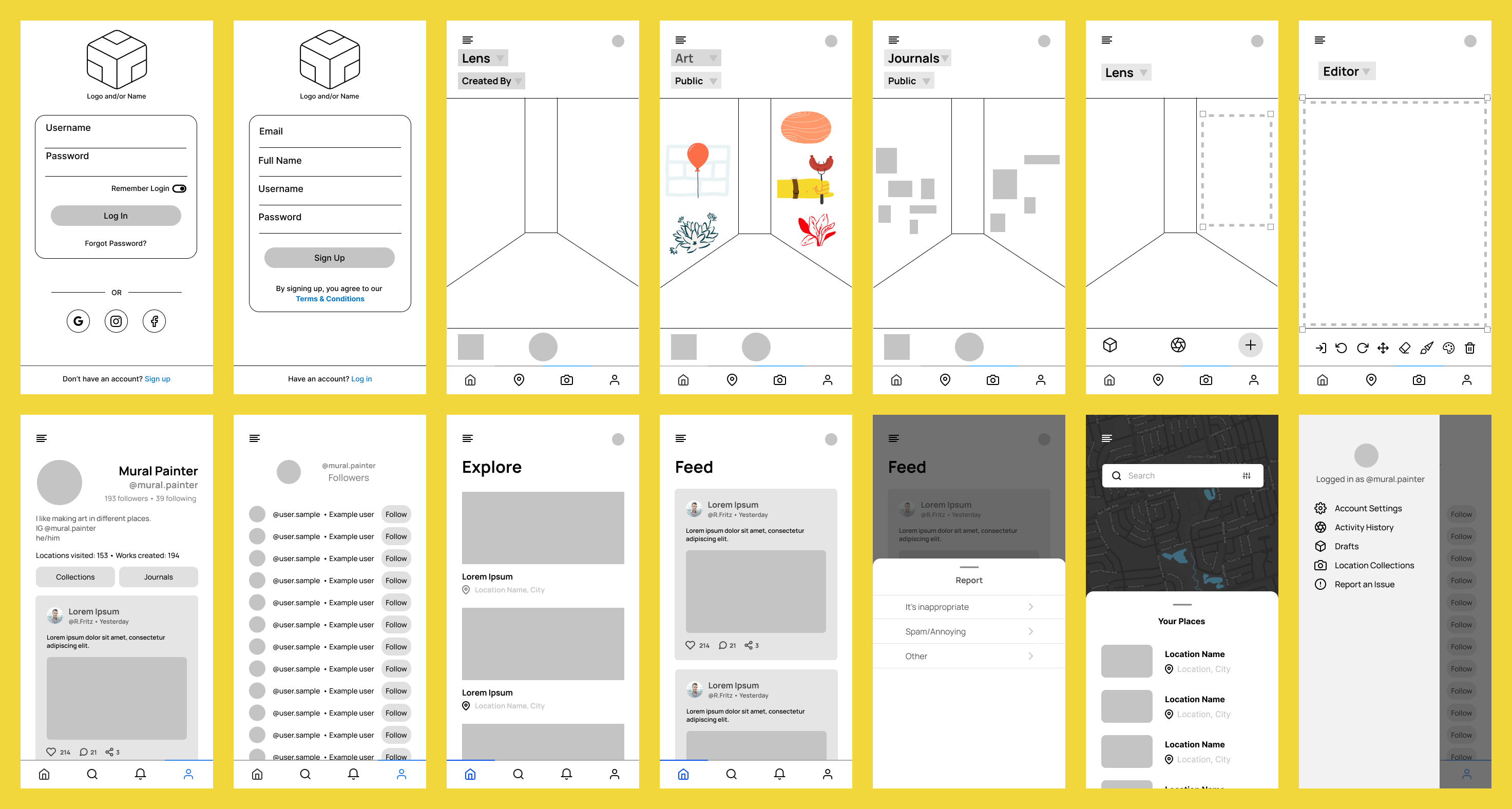 While building hi-fi prototypes, we made more specific decisions on design choices such as the app name, color scheme, and more refined screen layouts.

In our Figma prototype, a user can walk through the user flow of the Mureality mobile app. This includes onboarding, scrolling through a feed to look at other creators’ content, exploring new locations on a map view, and more. One of Mureality’s key features is the live AR camera, when a user is physically at a location and wants to see murals that are nearby. Users can create new visual or text content in a mural, whether drawing or writing is more of the user’s creative medium.

The prototype can be viewed in Figma using the below embed, at this link, or at the end of the presentation video at the top of the page.

Given more time, we would have loved to run more usability testing with our prototype, but the timeline of the Design Jam event was just over a short weekend. However, the project was a success for our goal as Mureality won the Social Experiences track of the event!

Mureality received some valuable feedback from the event judges as well as participants:
• The concept was received as impressive in both originality and creativity.
• Judges liked the emphasis on building community participation while still allowing for a level of anonymity.
• Artistic creations in Mureality felt more significant and meaningful than just putting graffiti somewhere.

There were additional feature ideas that came up in our ideation stage, many of which we believe would be in high demand and would integrate well into our existing experience. These include but are not limited to:

In future iterations, we would love to see many of these features implemented in Mureality - pending additional user research.

It was challenging to narrow our project scope, design research surveys and interviews, and coordinate tasks across a remote team of worldwide designers who had never worked together before, especially in the short time window of the Design Jam. Mureality was also a great exercise in both learning new skills and support/mentorship within our team, as everyone had varying levels of experience for different tasks such as Figma prototyping and research design.

Personally, I gained a lot of experience handling the project management of the team, defining and delegating tasks to ensure everyone could efficiently contribute and our MVP goals were met. I also learned a lot about spearheading research efforts and leading user interviews, in addition to contributions made at all stages of the design process.

Overall, we learned how to best give each other opportunities to learn as well as make the best use of each members' strengths. (All while working over different timezones across the globe!)